Springtime is nesting season for most birds. Warm temperatures and blooming vegetation provide birds with food and materials for procreation. Trees are the birds’ habitat of choice due to the trees’ multiple benefits: shade, food, and protection, to name some. 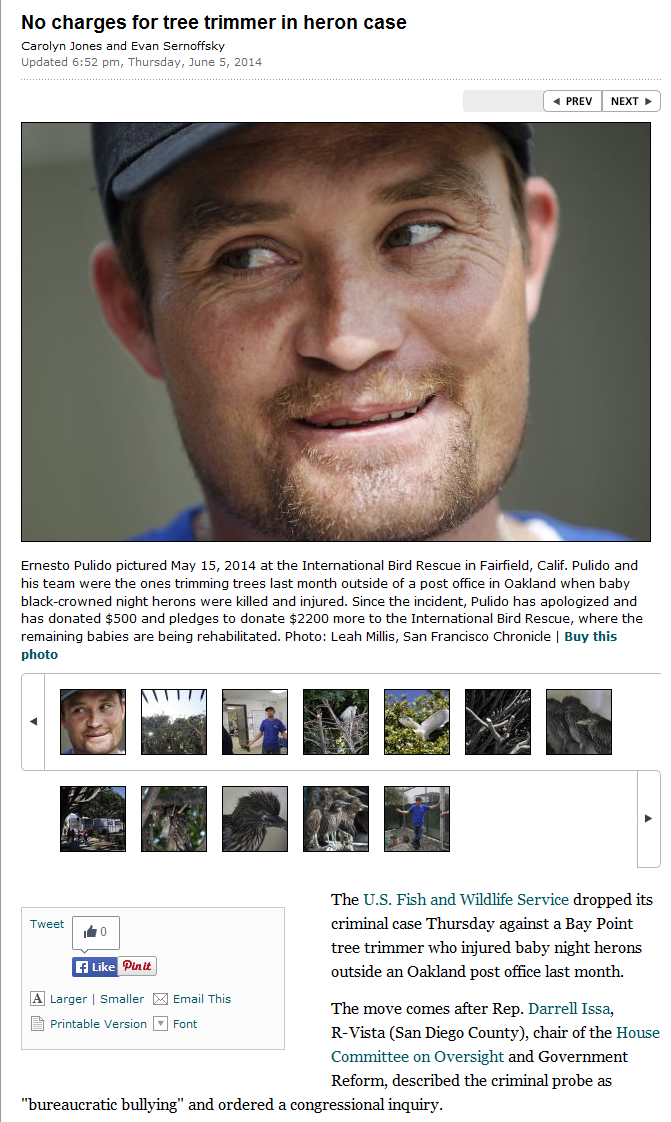 When considering to trim or cut down a tree in California for safety reasons, it pays to check it out for nests first, or to call a San Jose tree care specialist like Bay Area Tree Specialists. A little error of omission, such as failing to check for nests before tree trimming, could result in bigger penalties in the state.

An article on SFGate.com features an incident in Oakland, where a tree trimmer, Ernesto Pulido, injured a nest of baby herons during a tree trimming job at the local post office. Here’s an excerpt from the story:

“The incident occurred May 3, when the U.S. Postal Service hired Pulido to prune some city-owned ficus trees that overhang the post office parking lot. The trees housed dozens of egret and night heron nests, and the birds were defecating on the mail trucks.

During the trimming, several baby birds plunged to the ground, and witnesses said they saw nests fed into a wood chipper.

After the witnesses called Oakland police and a public uproar ensued, the wildlife service launched an investigation and found that Pulido had disturbed the nests – which would be a violation of federal law – but saw no evidence of baby birds in the chipper.

Volunteers collected five baby night herons, which were treated for fractures and bruises at International Bird Rescue in Fairfield.”

The article says initial charges against Pulido were dropped, perhaps due to lack of evidence that he killed those birds, as witnesses claimed. Pulido has also acknowledged his team’s negligence and has pledged a total of $2,700 to the International Bird Rescue.

This case illustrates the complexities of tree care during nesting season. For the record, the act of trimming during this time isn’t illegal; but nests are protected by state and federal laws. According to Section 3503 of the Fish and Game Code, it’s illegal to take or destroy a bird’s nest; it can only be moved. Violation of Section 3503 carries a penalty of up to $5,000 or six months imprisonment, or both.

Professional tree trimmers aren’t strangers to trees and nests. They know their duties and are aware of state regulations. For hazardous trees, residents are advised to let a professional San Jose tree trimming service, such as Bay Area Tree Specialists, handle the job instead of grabbing their saws and cutting away. Tree care and removal experts have the proper equipment and follow the correct procedures in tree pruning.