Spring is the best time for a lot of things: cleaning, fixing roofs, and selling the house (among others). It’s also not the best time of the year for some tasks, namely tree trimming.

Certain situations call for trees to be trimmed, namely when the branches are too close to utility lines. However, Joan Morris of Bay Area News Group warns about the effects of ill-timed trimming on tree inhabitants such as birds. Property owners may even face legal repercussions if migratory, native, or songbird species are harmed as a result of untimely pruning.

Out of Necessity
Dead bark and tree rot can manifest at any time. However, certain exceptions should be made when planning for tree trimming in San Jose and elsewhere.

“Arborists recommend that you prune only to remove dead or diseased wood or branches that may injure the tree by chafing against each other. For aesthetics, you may also cut branches that cross the center of the tree, but otherwise, just leave the tree as Mother Nature intended.”

This way, you can reduce the harm done to the tree both by rot and improper trimming. Cutting off a rotted branch saves the rest of the tree from infection and allows it to receive the nutrients it needs to grow. At the same time, proper trimming reduces the energy required for the tree to regrow its cut-off branches (given that you acted on a rotting branch right away). 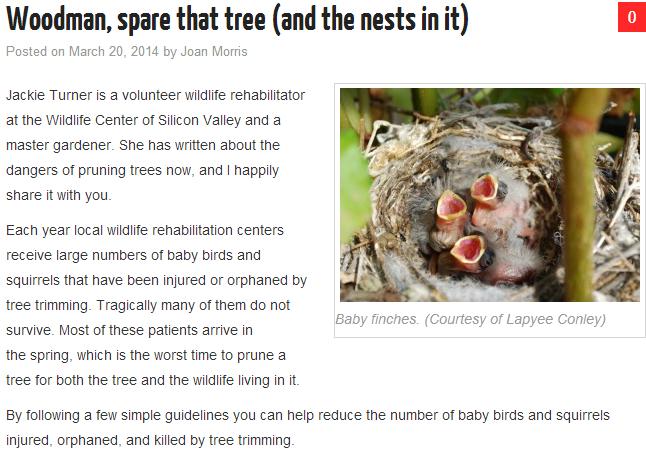 Animal Control
However, the most important reason for exercising discipline in tree trimming during spring is the welfare of the tree’s inhabitants. Trees are home to birds, squirrels, bees, and even monkeys (albeit rare in most urban settings). Trimming the wrong parts effectively renders these animals homeless.

Don’t even try to remove birds’ nests as you may find yourself in violation of the Migratory Bird Treaty Act. The act protects dozens of bird species, some of which are found within the Bay Area. You could face a fine of up to $15,000 and six months’ imprisonment if you attempt to move nests containing hatchlings or eggs without permission.

If you can wait for a few months until the hatchlings are old enough to fly on their own, it would be great. Otherwise, contact your local wildlife center for help.

San Jose tree care experts like Bay Area Tree Specialists have respect for wildlife. These arborists take note of the possible presence of animals, especially birds, before any pruning commences.