The West Coast sees relatively few hurricanes compared to the East Coast, but any coastal community does face the risk of storm surges. Many property owners consequently consider timely tree removal as an essential part of risk management. 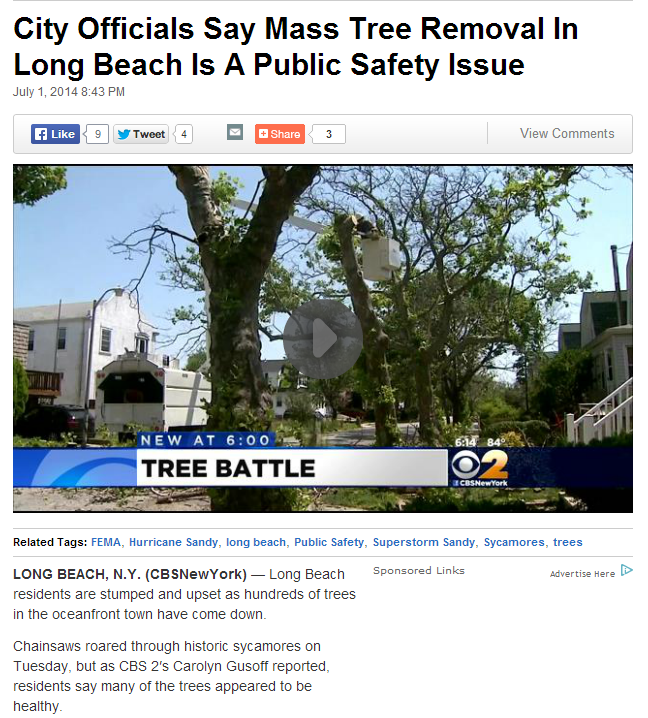 A CBS New York report talks about the dismay of many Long Beach residents about the decision to cut a swathe of trees that once provided shade. These trees still looked healthy, but Long Beach officials explained that the trees have been inundated with seawater as a result of storm surges during Hurricane Sandy.

“A tree could fall and could hit a pedestrian or traffic. It can be catastrophic,” said Joseph Febrixio, Long Beach Deputy Commissioner of Public Works.

Much of Long Island has since rebounded, but the same couldn’t be said for its trees that don’t take kindly to saltwater.

Saltwater’s Effects
To put it simply, experts say trees can “die of thirst” because of saltwater. To understand this, you have to look at the effects on a molecular scale.

Saltwater can enter trees via airborne salt spray and through the soil, particularly during a flood or storm surge. As salt enters the tree, it dissolves into sodium and chlorine ions. Sodium can restrict a tree’s intake of vital nutrients like magnesium and potassium while chlorine can pool around vital areas of the tree and prevent the growth of new buds.

In addition, the deicing salts utility crews use during winter can be just as harmful. Sodium chloride is a common deicing agent due to its low cost.

Quick Action
Aside from signs of saltwater damage, property owners should also watch out for a condition known as witches’ broom. Often fungal in nature, witches’ broom causes the edges of tree leaves to turn prematurely brown and the shoots to grow from a single point, resulting in tufts of twigs that resemble brooms or birds’ nests. Thorough inspection can reveal whether trees riddled with witches’ brooms have considerably weakened.

A San Jose tree service provider like Bay Area Tree Specialists knows that these symptoms require prompt action as a dying tree can pose safety risks for anyone passing below. Property owners, after all, can hardly wish to be held liable for a huge section of the tree falling on a parked car or, worse, a pedestrian.

Prior to cutting down any tree, Palo Alto tree removal experts typically conduct thorough inspections to ensure that a tree is indeed on its last legs. Arborists then cut down sections or entire trees before they inflict serious harm or damage.