Joyce Kilmer’s well-known poem, Trees, vividly illustrates the undisputed beauty of the wooden wonders from where he derived inspiration. Still, like all other life forms, trees are bound to expire at some point in their lives—despite the fact that they take decades or even centuries to do so.

This was the fate of 79 dead trees at a defunct golf course in Escondido, California. J. Harry Jones of U-T San Diego writes about their fate: 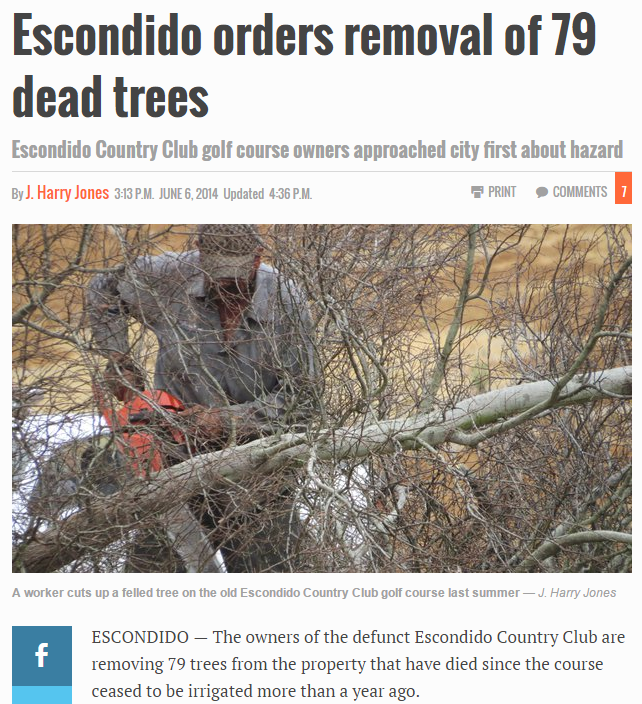 The owners of the defunct Escondido Country Club are removing 79 trees from the property that have died since the course ceased to be irrigated more than a year ago.

The property manager for Stuck in the Rough LLC contacted the city a few weeks ago asking if the dead trees should be removed. City officials then visited the site and ultimately notified the company that it had 30 days to remove the trees or face possible fines.

The dead trees were removed, within the deadline set by the City, but the urgency given by the city officials to the removal of the trees highlights the hazards these present.

Dead trees around the San Jose area should be removed by San Jose tree care pros because they’re weak, and might shed branches in a storm or even a simple windy day. Falling branches can damage nearby structures and objects, or even injure people and animals that may be passing underneath. The Bay Area might not be known for gusty winds at all, but the recent storm that hampered holiday travel last November 30 proves that no one can ever take chances.

Dead trees can pose dangers not only on private property, but also public property. For one, nearby power and utility lines can get damaged if a branch or a large limb breaks off and falls on them. This could result in a widespread power outage, and leave those in need of electricity at great danger, such as elderly people who use power-run medical equipment.

Aside from this, there’s also decomposition. Trees decompose the same way dead animals do—with an unpleasant scent. A dead tree’s scent might not be as repulsive, but it can be quite offensive to nearby residents. Dead trees can also be inhabited by pests, which could eventually make their way to nearby buildings.

Lastly, dead trees are unattractive, and can ruin any landscaping. If a tree has seen the last of its days, it would be best to have skilled San Jose tree trimming specialists from firms like Bay Area Tree Specialists safely handle its removal.