The expression was popularized as a warning between lumberjacks that a tree is about to fall. Unfortunately, no one is likely to issue a verbal warning when a tree in the city or the suburbs is about to fall. This is exactly what happened in Fairfield, AL recently. Fox News Alabama reports: 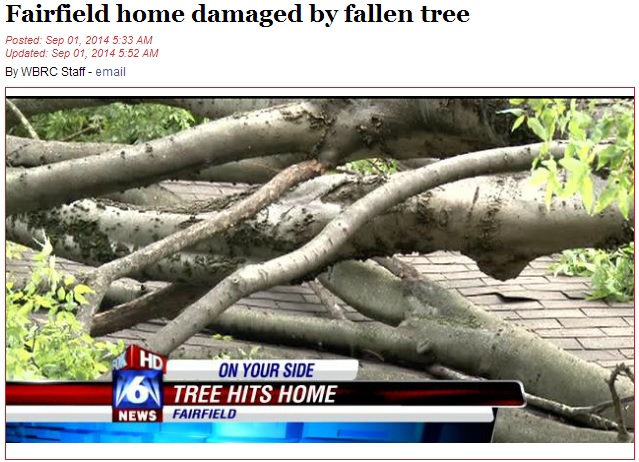 A tree came crashing down onto the roof of a home in Fairfield during Saturday’s thunderstorm.

The homeowners, Jeremy and Ashley Wilson, say they were inside when it happened.

They say around 6 p.m. on Saturday they heard loud boom and they felt the floor shake. Moments later, their power went out.

A large tree fell onto the side of the house and punctured three holes through the roof of their bedroom.

The couple says they’re not sure how long it will take to clean up the mess, but they are just thankful the situation wasn’t worse.

Thankfully, no one was hurt during the accident. However, the story does highlight the danger of having a compromised tree on your property.

Although no one will be outside your home to yell “timber” for you, there are several warning signs you can keep an eye out for that indicate a tree is in danger of falling. If you notice any of the following signs, immediately call an experienced Palo Alto tree removal service like Bay Area Tree Specialists to come and remove your tree:

Leaning Tree
Simply put, a tree shouldn’t be leaning. A leaning tree may indicate that it is nearing the end of the line or that it has a problem with its roots.

Dead Branches
Dead branches are usually an isolated problem and should be pruned promptly. However, multiple dead branches are a cause for concern, especially if they are all located on one side. This particular problem may indicate that the trunk of the tree has been compromised.

Fungal Growth
Fungal growth at the base of a tree shouldn’t be ignored. Fungi such as oak root fungus, sulfur fungus, and oyster mushroom can decay a tree from the inside out.

When you need to hire professional tree service in San Jose or Palo Alto, be sure to only work with one that employs certified arborists. Removing a tree can be dangerous, especially when located near homes or power lines. As such, you’ll want to leave the task in the capable hands of an expert.