Trees, no doubt, beautify a city, but they aren’t always nature’s angels. A KTVU article by John Fowler, published on April 22, 2014, reports some of the negative effects trees have on a community: 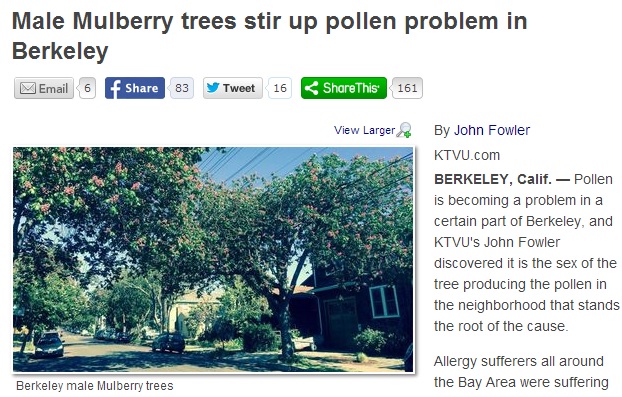 “Allergy sufferers all around the Bay Area were suffering Tuesday because of the pollen borne on the wind.

The problem has been made worse by urban trees. Experts tell KTVU the vast majority are male trees that produce lots of pollen.

KTVU confirmed Tuesday Berkeley selected only male Mulberry trees for a stretch of Delaware Street. A city official said it was to avoid the problems of dropping fruit.

“It quite backfired because everybody’s allergic to a

ll the pollen that comes from the male trees and I guess that’s what you get when you mess with Mother Nature,” said Hodge.”

In fact, the prevalence of pollen shouldn’t be the only concern of people regarding trees. While male trees may have produced excessive pollen which affected a huge number of people, there are other risks trees pose that could endanger the residents.

Falling Branches
One of the possible risks is falling branches. Branches that fail usually have weak branch unions, which are either caused by the growth of bark inside the tree (between the branch and a stem near it), or by the development of water sprouts (or epicormic branches) in place of stressed, injured or decayed branches. Homeowners and concerned individuals in the Bay Area who are not sure of the condition of trees near their property should call a tree service in San Jose, such as Bay Area Tree Specialists, to check trees in the neighborhood.

Hitting Power Lines
Another hazard trees pose, particularly unmaintained ones, is causing damage to exposed power lines. Trees with widespread branches that reach poles, lampposts and power lines not only cause damage to itself, but also trigger power outages in nearby houses or neighborhoods.

Trees are necessary for the health and well-being of a community. However, a balance between nature and technological advances should be established, and trees that affect people’s everyday lives should be treated accordingly.