Based on the calendar, spring in the United States officially began on March 20, 2014. However, according to a report from the Weather Channel, there was hardly any sign of spring in several areas in Northern California as the country headed toward the end of March.

A storm survey found EF1 damage near Willows, Calif. along a roughly one-quarter mile long path, with damage to outbuildings and almond orchards.

An EF0 tornado was confirmed near Roseville in Placer County. The tornado was just 10 to 20 yards wide and was on the ground for 200 to 300 yards. Some minor damage was reported.

Another tornado was reported at around 5:44 p.m. east of Interstate 5 near Chico, Calif. Significant amounts of hail were also reported.”

Although Palo Alto locals did not bear the brunt of these recent weather disturbances, this piece of news can serve as a lesson to them. After all, Palo Alto belongs to Santa Clara County, which is only three hours away from Placer County. Unusual weather occurrences, like those reported above, can cause serious damage to trees. This is something that should prompt locals to hire a trusted Palo Alto arborist to restore their trees’ health and vigor. 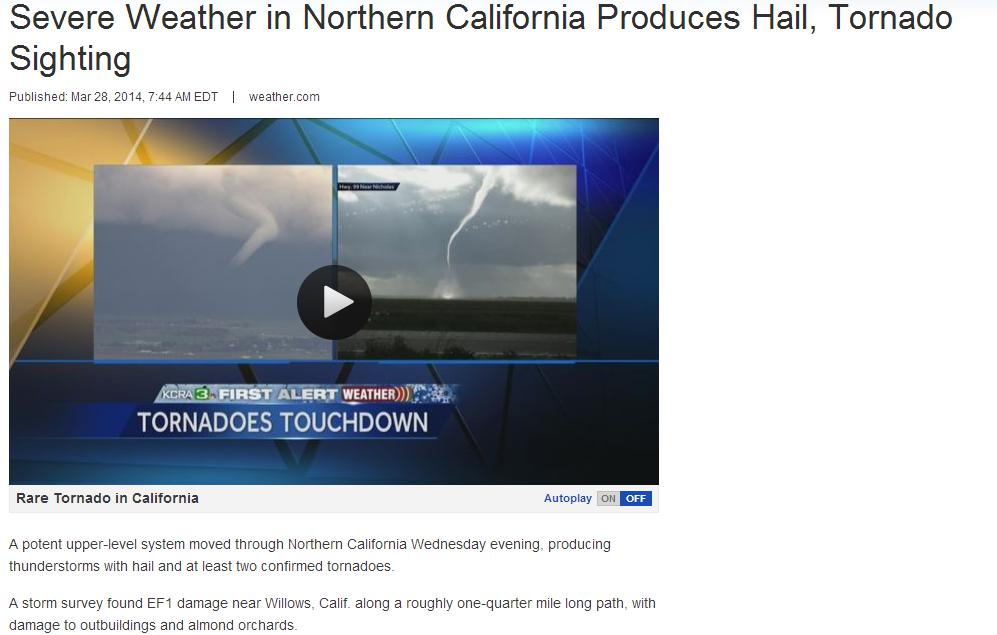 Young trees and older trees with thin barks, like birch trees, are especially vulnerable to hail. The wounds trees can sustain due to hail driven by wind can start off insect infestation and should, therefore, be treated with tree wound dressing right away. Locals can also rely on high-precision pruning services from a reliable Palo Alto tree service company like Bay Area Tree Specialists for the prompt removal of broken tree branches.

At times, though, weather-related damage to trees can be so severe that they may have to be removed rather than treated. If one has an El Palo Alto in the yard—i.e. the very tree after which the city of Palo Alto was named—and 50 percent of the trees in the lot are affected by wind or storm damage, chances are, the eponymous tree may not be able to make it through another season. Fortunately, homeowners can rely on an experienced arborist to remove the affected trees with no damage to their properties.

Trees are at the mercy of nature. It’s comforting to know that homeowners can turn to professional tree care services to restore weather-damaged trees on their properties.